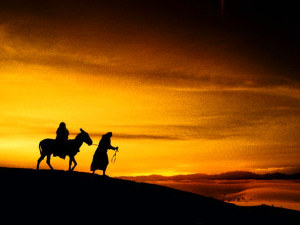 Luke 2:1-7
In those days a decree went out from Caesar Augustus that all the world should be registered. This was the first registration when Quirinius was governor of Syria. And all went to be registered, each to his own town. And Joseph also went up from Galilee, from the town of Nazareth, to Judea, to the city of David, which is called Bethlehem, because he was of the house and lineage of David, to be registered with Mary, his betrothed, who was with child. And while they were there, the time came for her to give birth. And she gave birth to her firstborn son and wrapped him in swaddling cloths and laid him in a manger, because there was no place for them in the inn.

Every year around Christmas time, many believers read the account of Jesus’ birth. But perhaps we’ve forgotten just how important it is. More often than not, we skim over the verses, telling ourselves we already understand them. However, without a deeper, more intimate look at our Saviour’s birth, we’ll miss the truths the Lord wants us to learn and apply to our lives.

16th November 2014. In the text we see that the shepherds heard; believed, acted, shared then worshipped. What will our response be?

23rd November 2014. Joseph is a just and a righteous man but chooses divorce but then hears from God and obeys.

30th November 2014. There are five things that Matthew would have us see about Jesus: Jesus is the Messiah; He is to be worshiped by all mankind; God is sovereign and in control over all creation which troubles those who do not want to worship Him; all things are to bring glory and honour to Jesus

7th December 2014. There are many prophecies within the Old Testament that pointed towards the the coming King, the birth of the anointed one who would redeem the world. Les Howard leads us though just a few of them.