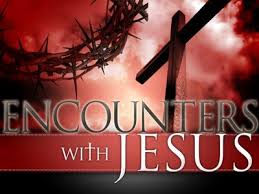 One of the biggest obstacles for people to accept or believe in Christianity is that they think they know all about it already. After all, hasn’t it been around for thousands of years? Doesn’t everybody know what Christians believe?

But if we look at Jesus’ encounters with various men and women during his life, we will find some of our assumptions challenged. These conversations were not about personal sins or specific religious views and practices, nor were they a set of talking points or a political platform. Instead, in these encounters we see him meeting people at the point of their big, unspoken questions: Who are we, and why are we here? Why be a good person; why love instead of hate? What’s wrong with the world—And what, if anything, can make it right? – Timothy Keller.

Encounters
10th May 2015. Andy looks at four interactions between Peter and Jesus